He wants to kill himself but smart apps and apliances are not allowing him to do it. 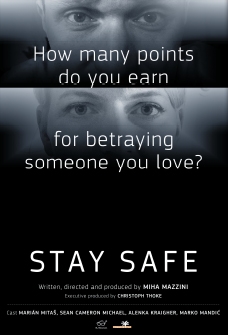 While driving home from work, sudden despair makes him turn the wheel abruptly, taking the car and himself into the abyss. But nothing happens. Cars, like all other gadgets and machines, have become smart and won’t allow suicidal tendencies.

STAY SAFE is a story about an ordinary couple in the safe world of tomorrow – filled with smart apps and gadgets designed to make life easier and safer. They slowly go crazy when they realize the extent to which they are no longer in control of their lives and try to find themselves and a way out.

As an anthropologist working in the technology sector I deal with the contact between humans and technology. We are born to trust and with ever-greater individualisation that leads to ever-greater isolation, the question that arises is who or what can we trust if not humans? Technology with its smart devices and artificial intelligence offers itself as a miraculous and simple solution. It will provide us with safety and everything we do will be tracked and evaluated on a points system so we will ultimately know precisely who has a positive balance and who a negative one.

As a writer and film-maker I began thinking about a world in which we have, for our own sense of safety, subjugated ourselves to technology. I wrote a play about a couple who builds a mutual relationship not because of technology but in spite of it.

Before the play had a chance to get staged the Covid pandemic locked us all into our homes. I shortened the script and turned it into a series of video conversations that slowly unveil to the viewer the world in which the characters live, a world not that far from today.

Such excellent actors agreed to cooperate on the project that filming was a great enjoyment, even if each of them had to also deal with technical aspects, from lighting to sound, recording themselves onto their phone while I directed them via video call. Without meeting in person, each of us stayed at home, from Cape Town and Bratislava to New York and Ljubljana, and we made a film that I am very proud of.

This website uses cookies to improve your experience while you navigate through the website. Out of these, the cookies that are categorized as necessary are stored on your browser as they are essential for the working of basic functionalities of the website. We also use third-party cookies that help us analyze and understand how you use this website. These cookies will be stored in your browser only with your consent. You also have the option to opt-out of these cookies. But opting out of some of these cookies may affect your browsing experience.
Obvezni Always Enabled
Funkcionalnost
Performance
Analitika
Marketing
Ostali
Powered by